I’m sure I talked about it before, my fascination with the word “manifest”. We’re all locked within the physical parameters of this world. It can be trying: getting money , keeping things fixed, and keeping up with technical changes. That’s only part of what we have to deal with.

So when we have a new idea that solves a problem, we’ve defied the parameters, in a sense. How big is a thought? The size of your skull? How much does it weigh? It’s from the other realm, but can help us here. Or harm us.

I’m somewhat fascinated by these things, and get to contemplate them on occasion. These days, life often compels me to think about them. I have -zero- training in psychology, and anatomy, so these are just my armchair musings. From what I understand, there are things that reinforce pathways in your mind, connections between brain cells. The connections are called synapse. Am I right in thinking that this is a case of the abstract changing the physical?

What if a person was selective about truth? They use it when it suites them, less so, when it’s inconvenient. Do the mental pathways of a repeated lie become reinforced?

Another thing, based on very limited observation, I’m wondering if there’s a connection between pride and mental illness. The Bible points out that thinking too highly of oneself leads to trouble, or at the least, embarrassment. I’m guessing that if one feels no need for introspection, one will miss one’s misconceptions while they’re yet small. Then, they  become reinforced, then they become fact and delusion. This is obviously all speculation, I just wonder how these things get started. Of course, as a Christian, I have to always be looking for the beam in my own eye, and pray that my own thinking is right.

More cloud pictures (I know, what kind of mental case stares at clouds all the time?) The first one was taken right after the sun went behind this cloud. The second one is just kind of chunky and square. 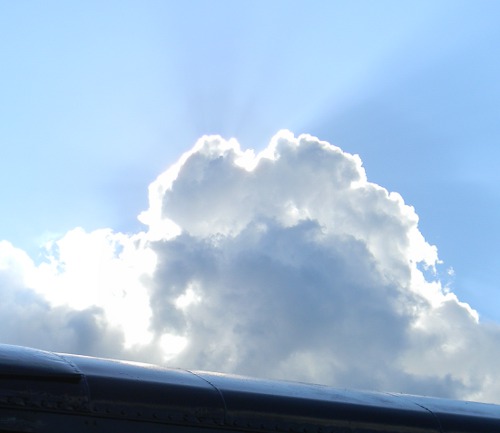 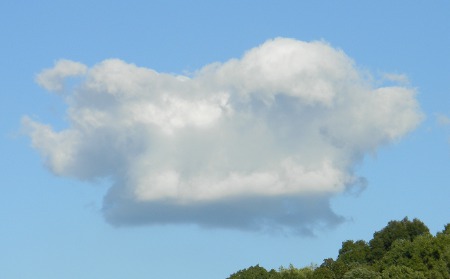 I simplified the ‘Deplorable’ graphic, made it more legible, then cut it out of vinyl, and applied it to my truck. I frequently read how dangerous it is to defy Hillary. There are a couple ways to look at this. On the one hand, if you estimated the number of people saying negative things about her, it would be in the millions. Tens of millions, probably hundreds of millions at the international level. The risk to one out of that number could be considered small or nonexistent.

But if you look at it another way, It could be higher. Consider that much of the internet is an echo chamber. Your social media friends and other commenters at your favorite blogs are probably of a similar mindset to you. I even wonder if the powers that be rely on that. But if you take your ideas out in public, you’ve got a different exposure, and encourage others to do the same. Not only that, but the specific thing your protesting doesn’t get buried under current events in the news. So maybe the risk is higher.

Even if it is, it’s not as risky as what will happen to dissenters if she does get in office. You’ll be up against the entire government, and it will much harder to deal with. 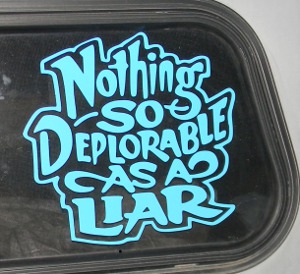 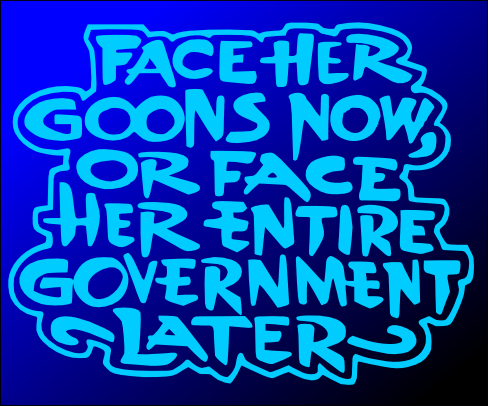 I was at a job site recently, and across a mowed field, behind a line of trees, the Moon started rising. A couple pictures: 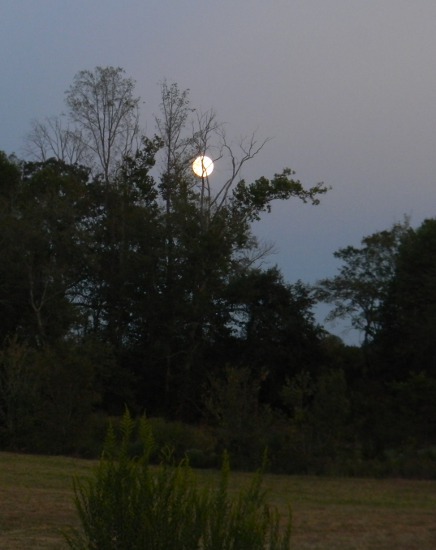 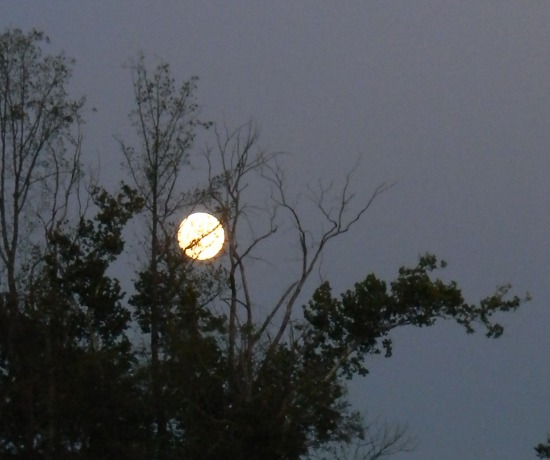 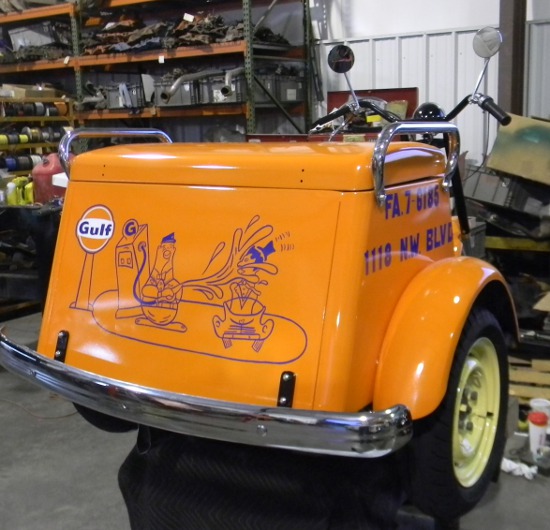 I can’t understand all the shootings of unarmed Black men. The guys with real and fake guns that they point at police officers, not at all the same; they have to deal with the consequences of stupid. But the other is strange, like there’s something in the water. If this was 1890, or 1905, yeah, there was a lot of racism back then, and this would be a turn for the worse, but not strange. These days it’s strange because I thought things were getting better, after the civil rights movement of the ’60’s. So for this to show up like a wave is bizarre.

You can get this graphic as a free vector file here:

I’m going to start a page here of free vector files, that way they can’t ever become banned content. 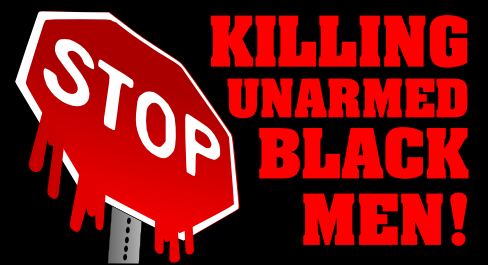 Several weeks ago, I put on my first Timbering Tools Exhibit in 10 years time. It was nearby, at the Ramsey House, an historic site. I didn’t have time to prepare as well as I would like, but still, there was enough action to satisfy people. Normally I include a pit saw frame, so that I can demonstrate a pit saw. That’s a wooden structure that I put a log up on. Then I stand on the top, and an assistant stands below; and we rip saw boards from the log. Also, I brought the wrong kind of wood for the shingle making, so the froe was more or less a static display. But there was still crosscut saw, rail splitting, draw knife, and three tools used for hewing a log. 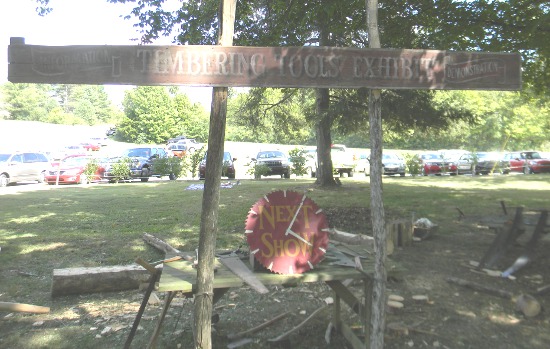 Impromptu front of my display area. It looked better in person. 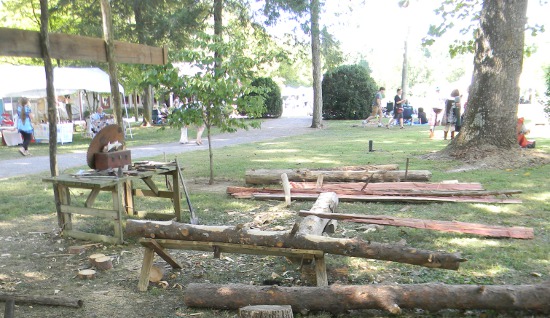 In the foreground is a small Virginia Pine log in a cradle, for the crosscut saw. There’s the backside of the signs, and behind that, the log being hewn square. Farthest away are the Cedar logs being split into fence rails. 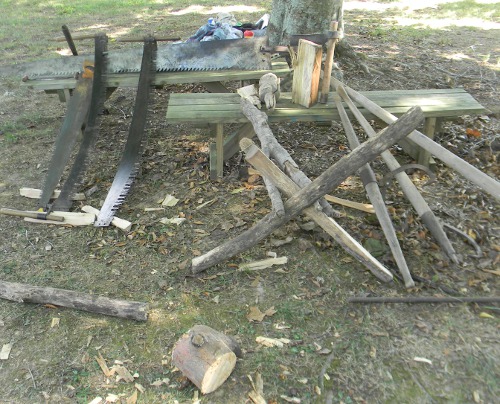 Some, but not all the tools. In this picture there are 3 crosscut saws, a pit saw, a froe, a log moving tool, and two peavys. 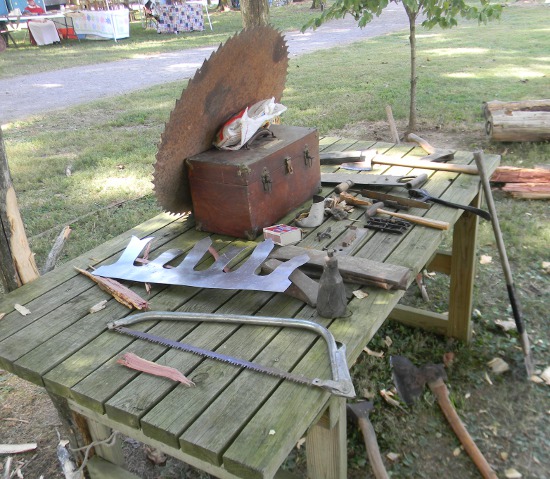 This table is where I give the final part of the demonstration. On the ground you can see the broad axe, and the foot adze, they’re for the hewing, earlier in the show. On the table is a visual aid teaching tool to show how the saw teeth cut. The old saw blade has a clock painted on the other side, with movable magnetic hands to show when the next demonstration will be. The wood box has sharpenning tools, for those interested after the show. On top of the box is a bag of corn chips. I first demonstrate how one can use fat pine (“Lightered” or “Rich Pine” in other regions) instead of candles. Then I tell people that if they’re out of both candles and fat pine, they can use ordinary corn chips to burn profusely. People are always surprised at that one.

I had a good time, met some neat people.

For years, I thought I knew what the term “The Power of Suggestion” meant, but I was wrong, or off, at least. I thought it was a subtle way of saying something. For instance, an advertisement will mention the latest fashion, but what they really mean is: “Wear these, and man YOU will be the epicenter of hip and cool!!”

It actually means other things, one of then being experiments with words that are “primers”. Interesting reading.

So I guess ISIS now has their own air force? That or it was a mighty interesting mistake killing those 62 Syrian troops who were trapped by ISIS. In August I think it was, I was saying that the next 4 or 5 months would be the most dangerous in American history, but maybe we’ll get off easier, at least until the actual election. Until that time the US president has to do as much damage to the rest of the world as he can.

Here’s a comparison: The powers that be depend on a continual stream of shocking news incidents to fade the memory of shocking things they have done. It’s EXACTLY what an on line reputaion frim does. They can’t necessarily erase online content about you, but they can and do bury it beneath so much new content, ath the old stuff won’t show in a search.

An analogy I’ve been telling people:

There’s not enough America left in the tank to go down the Hillary road. 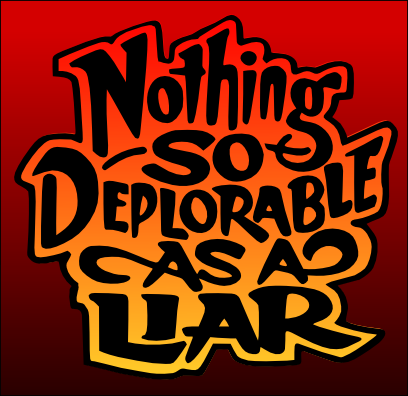 The info about these tools is at my restoration blog:

Diversity of home made card scrapers. 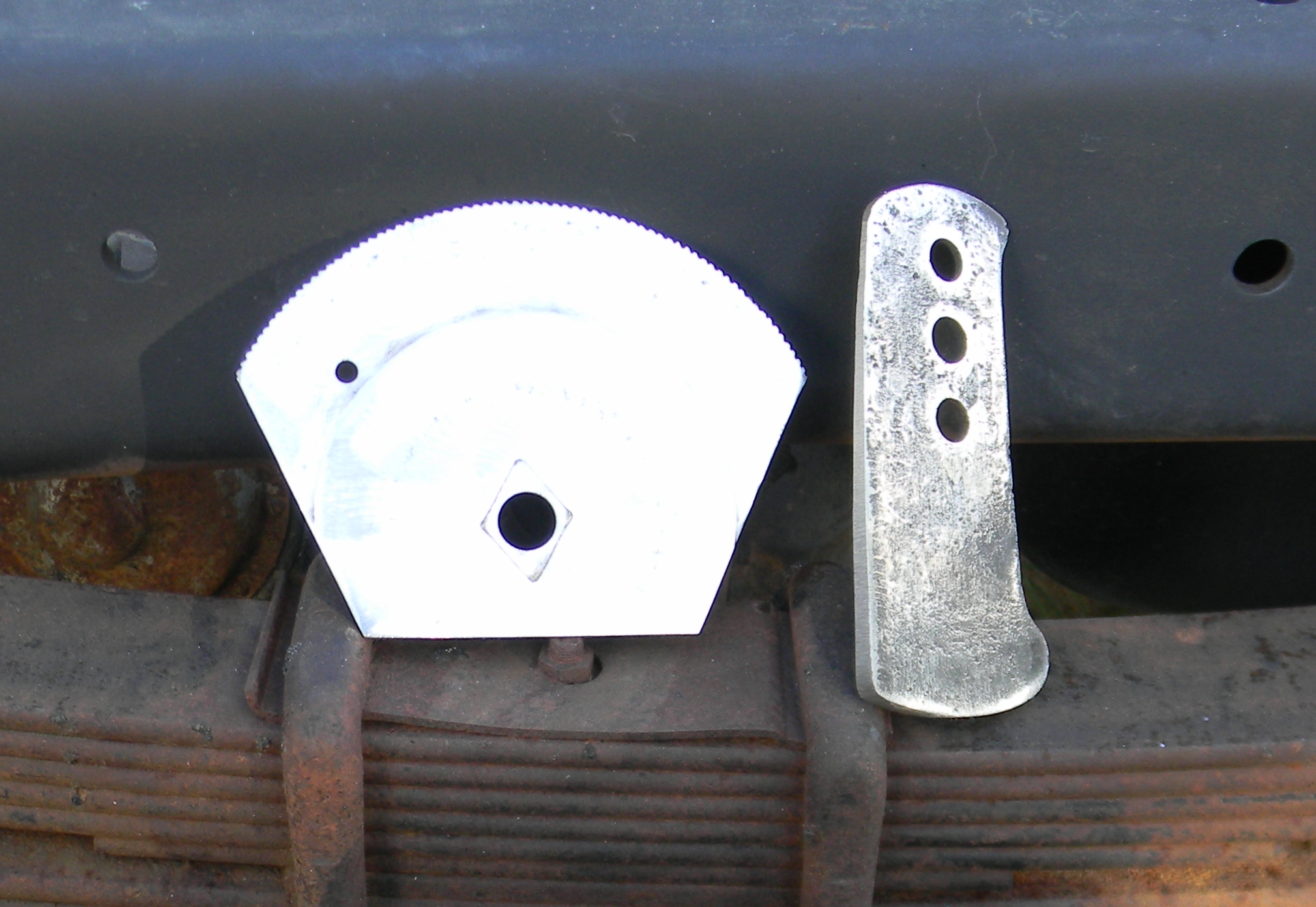 I have (had?) a website that is hosted in Moscow Russia. I wasn’t 100% determined to move there; but was looking into it pretty seriously. The possibility is still open. One of the purposes of having the site was so that it had age and traffic before I moved there.

One of the features at the site was a series of pages I call “The Papa Challenge”. I say “was” because The site went down a few weeks back, and tech support hasn’t replied to my submitted tickets. This isn’t the first time it has happened, but I realized that SEO work is a joke if one’s site is down that long. One can only speculate the details of why it happened; maybe hosting is much more reliable at other companies. I used the one I have because getting a payment to any company over there was difficult. This company took Paypal, which made it easy. Somebody else might laugh at how much trouble I had, they know of an easier way. Well OK, but I don’t. There’s a payment system through the big search engine Yandex, maybe I should look into that. For now, I’m setting up a VK social media account.

I wanted fathers to be challenged in a friendly way to do projects with their children. Being that I’m losing confidence in my other site, I think I’ll start putting the Papa Challenge pages here. The first one is about learning to read maps. It’s a page at this site, here’s the link. 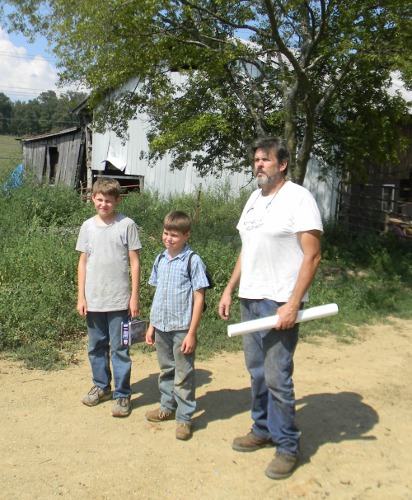 Also, some more cloud pictures. These are beautiful to me, I hope others like them too. 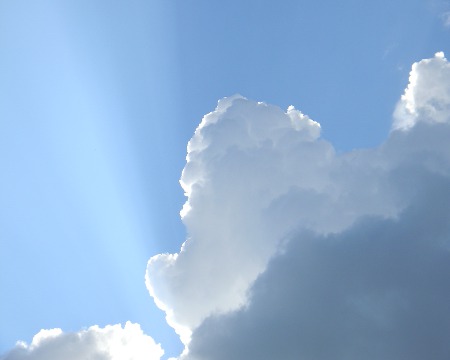 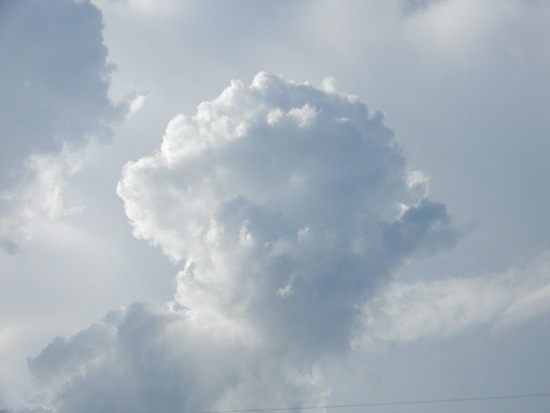 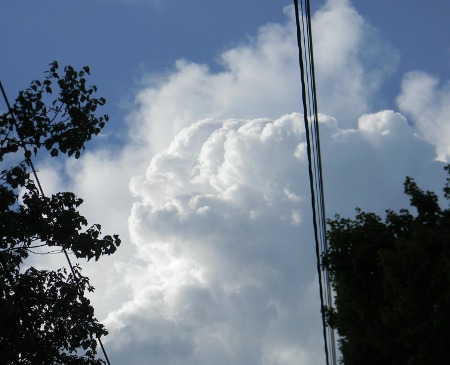 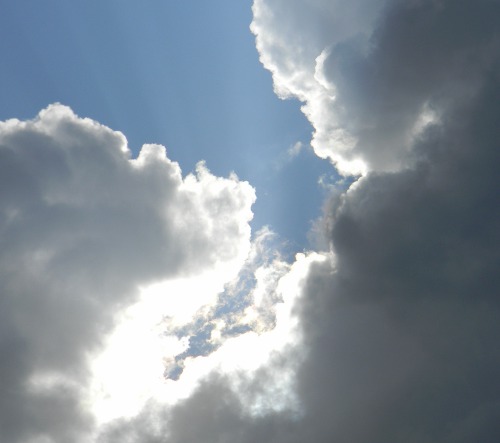