I finally completed a giant paint can I started several years ago. Read more at THIS SITE. 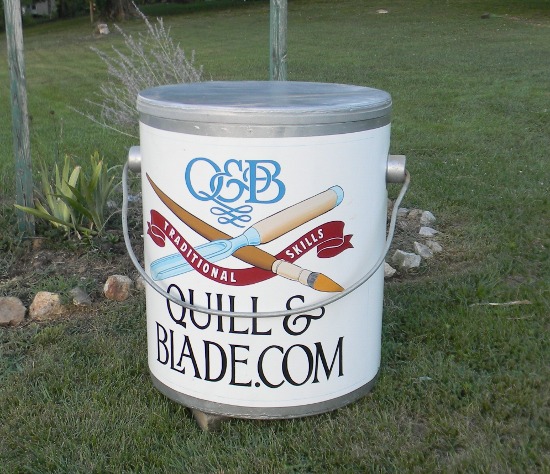 Here’s an unusual adaptation for a truck grille: 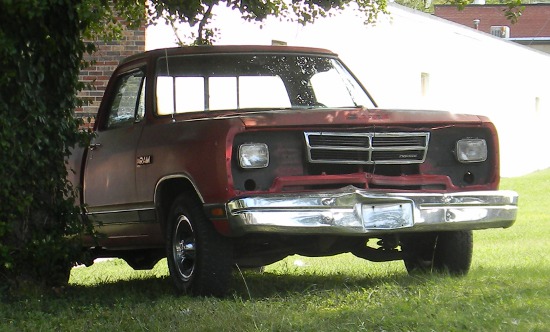 I probably posted the graphics here before, but I finally printed the card out. For those days when you’re bad for doing the right thing, or not the thing the other people wanted. 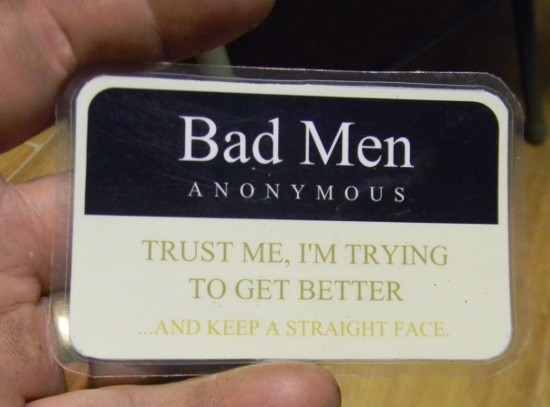 My sister lives in California. I called her recently to get her address, because my daughter is getting married, and wants to send out invitations. She lives on a street called Janette. She said you can spell it 3 different ways; the postal deliverer said so. I said you’re kidding right? Are there 3 street signs with different spelling? Answer: yes, Janette, Jannete, and Jannette. Has pot smoking made its way into government offices?

Other people say the have the best sunsets or sky scenes in the world, but I have to wonder. There are some great ones right here in East Tennessee. I saw this multi colored cloud the other day; then, I went around a few curves and corners, and saw this second image. I’m pretty sure it’s the same cloud, without the colors. 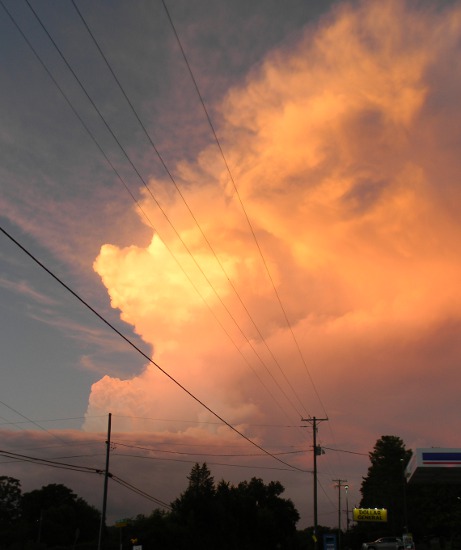 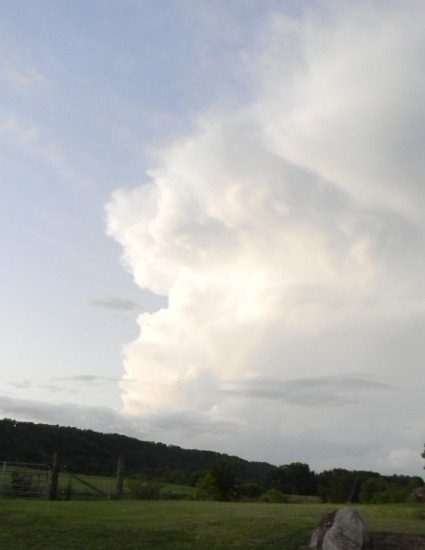 Here’s the back of my truck, I’m shocked at what’s happening in America right now. Maybe more shocked that others aren’t making a public outcry. Shouldn’t every church sign have some mention of the abomination in the land? I’m not seeing it. 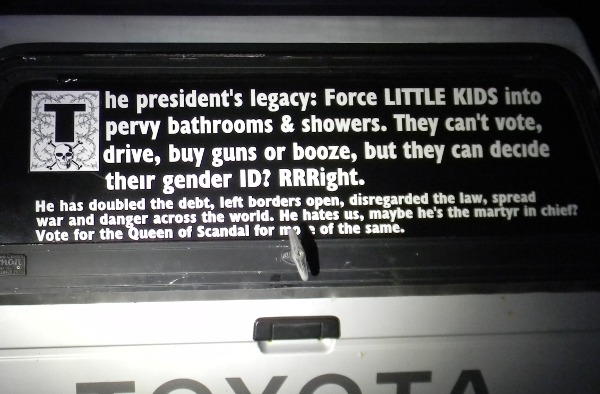 Dear reader, my apologies if I repeat myself. I barely have time to make posts, and with their varied topics, searching past posts is about impossible. The biggest problem is that I go through my everyday routines, rehearsing how I’ll word a topic, then, a few days later, when I go to actually post, I wonder if the memory is a past post. You probably do the same thing all the time, thanks, that’s comforting.

The John Hancock club…one thing that should be obvious from the recent failed coup in Turkey, is that a list of dissidents already existed. Within hours of the failed coup, thousands of professors, judges, and military personnel were arrested. So why do people here think they’re names aren’t on a list? Maybe they -do- think they’re on a list, but hope nothing will come of it. Good luck with that.

So…legend has it that John Hancock signed the declaration of independence so large because he wanted to be sure the fat old king could see it without his spectacles. If so, he knew that you couldn’t be a -little- bit on the list. It’s binary, if you’re on it, you’re really on it. More later.

I saw a nice looking sticker on the back of a car, that said “In God we trust”. I wondered where the people sent their children to school. A comparison from tonight: If a county’s economy is judged not by the wealth of the richest, but by the living standards of the poorest, then is our spirituality judged by what we teach children? Highly esteemed seminaries and popular preachers aren’t the measure; it’s that we teach most children there is no God. And now it’s worse.

One of the first principles a Christian must abide by is to first consider the beam in his own eye when finding fault in others. So I’m frequently praying that I’m not the one who is irrational to the point of psychosis. I’m seeing irrationality show up in a number of ways, the biggest being a lack of shock. PEOPLE! Do you not remember how shocking it would have been a couple decades ago to have the government mandate that kids must participate in pervy bathrooms and showers? Bizarre, disgusting, shocking. “Oh, but that was so six weeks ago.”

I watched a flying insect in this room. It was continually smashing HARD into things in the room. I’m no entomologist, which is a bugologist, studies insects, so pardon me if my understanding of their physiology is all wrong. A good contemplation was acquired anyway.

So yeah, this bug must’ve had a REALLY bad headache. My first thought anyway. But then I remembered how bugs have ears and brains in unusual places. I wondered if there was a brain in the head, which recorded pain, made decisions as to discontinue painful behavior, but those tasks were processed in the front of the brain. Routine tasks were handled in the back. The front gets damaged to the point of non function, but the rest of the brain keeps the bug flying around into more collisions.

So if pornography destroys sensibilities about normal behavior, and the harm one is doing to others; is it like a bug that has part of its brain damaged? The user does the routines of going to work, eating, sleeping, and the rest, but part of the mind is gone. Does this apply to other forms of irrationality in America?

Reading the book of Isaiah in the Old Testament is very rewarding to me. I don’t have time tonight to share all my notes, but here are a few: Some years back, I noticed that the word ‘judgment’ was sometimes used in the OT about the way you treat the poor. I didn’t do a word study on it, but I wondered if it meant that one should wisely do charitable deeds, don’t  carelessly enable people.

Looking at Isaiah chapter 59, I wondered if a lack of judgment meant that the poor get no justice. If I recall, I read years ago that one of the problems with the Mexican economy is that there is no small claims court for small business owners and contractors. If someone shortchanges them, they have no recourse. Actually, it might have been that they weren’t issued licenses, so they had no standing in court.

In Isaiah chapter 58, it talks about what the Lord considers a true fast. It looks to be saying that one shouldn’t humble one’s self and fast; while the poor parts of society are lacking.

Regular readers know that I have been glad that the Russian Federation has resisted the progressive agenda that has taken over most of the world. I have been getting the family ready to leave the country, should the need arise. I even considered moving to Russia, difficult as that would be.

Much of my survival is done in the physical world, whether I’m being paid to restore something, or doing it for myself. It involves paint, lubricants, cleaners, tools, and a lot of other things. How do these things work in a very cold environment? Is there work in the winter, or does the local economy slow way down?

The language is 4th on a scale where 5th is the most difficult to learn. Until one gets his citizenship, he must regularly leave the country and come back, part of the residency permit, I think. How does one do this with 13 people in the family? Who milks the cow and feeds the horses while you’re away?

Moving there was looking less that realistic; I thought it was like watching a ship travel out to sea, the likelihood was further and further away. On the other hand, sometimes you just do a thing, and work out the details later. Especially if you’re on the run.

As if all that wasn’t bad enough, I now am getting news of recent legislation passed by the Duma. One involves internet security and a requirement that all those wanting to share their faith must obtain a license. I did a little research, and it looks like that might not apply to individuals. Of course, things change in time, and it might be enforced upon individuals in the future.

The other legislation must be the result of widespread domestic violence. It appears that they recently passed a law that bans all forms of striking, including spanking. If this is true, the lawmakers may be well intentioned, but should know that it’s a hallmark of the most progressive countries. In those places, parents merely give birth to, and physical nourishment to their offspring. I suppose that the personnel deciding what is acceptable for your children will have about as much concern for their well being as the staff at the Romanian orphanages did a couple decades ago.

It is easy to rattle ones mouth about events on the other side of the world, events which he actually has insufficient knowledge of. But if these things are true, it is sad to see Russia go the way of the progressives. The ship looks to be beyond the horizon. I still pray every night for Russia.