Going through my notes of odd or interesting thoughts…

It’s easy to see the actions of some Jews, recognize them as the works of subversion and wickedness; and regard all Jews that way. But the Bible has clear passages about this. One is the promise given to Abraham in genesis chapter 12 verse 3,

And I will bless them that bless thee, and curse him that curseth thee: and in thee shall all families of the earth be blessed.

Most theologians believe that last part refers to Christ, this is one of the earliest mentions of Christ in the Bible. So in one verse is a warning to be careful in our treatment of Jews, and a promise of Jesus coming. Another verse in the new testament says that Christians are the wild olive branch grafted onto the good olive branch of the Jews. Other verses clearly mention the synagogue of Satan, so there’s a Biblical distinction between Jews.

If I recall, I recently read an article saying that North Korea just outlawed sarcasm. If that’s true, what’s next, sorrow? YOU THERE!! you better have good reason for the long face. His majesty says you are happy!

A neighbor recently decided he wanted one big gate, rather than two standard size gates for his pasture. So he welded two together. This required some extra engineering to support the extra downward leverage on the post it was mounted on. This took the form of an extra tall post, to secure two cables, which angle out and help hold it up. Atop all this, it was decided that a flag pole was appropriate. It was beginning to look like a bit much, until I noticed that he included a Cummins flag. Diesel motors are a big deal in these rural parts; and at that point, it was all sensible. 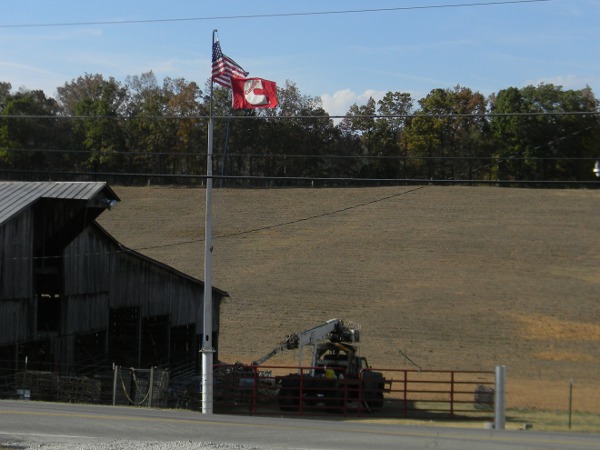 Did I mention slob? OK, but bear with me, this might get a bit wordy, but it was a joyful epiphany the other day. I guess it was 10 years ago or more, I was on a quest to define the word “art”. I had a dictionary with a paragraph of different definitions. One of them was the idea that art creates a reaction from people. Whether it’s appreciating the beauty of the subject, the way it’s executed, like the smoothness of a sculpture, or the feelings caused by an abstract work.

I mentioned the reaction part to a guy where I was working, and he said “Yeah, but if I hit that guy over there on the head, it will cause a reaction; but it won’t be art”. So on my search went, until I was standing outside an art gallery in the tourist area. I was trying to get a longer distance assessment of a sign I had just installed on a nearby building. I turned around, looked through the window, and there was a beautiful painting of a tree in the mountains, in bloom, looking over a valley. I think it was the Jim Gray gallery.

Anyway, I was looking at the painting, wondering who would buy it. I figured some lady would take it home, having the perfect place for it in here mind before she even made the purchase. It would go there, on that wall, with the perfect furniture and surroundings, and it would be a joy. The lady’s friends would learn to see the beauty in the scene. What would happen if I bought it? I do some illustration myself, and it would be appreciated in a different way. I would contemplate and scrutinize it in depth for its methods.

Then it hit me. Maybe I’ve been asking the wrong question all along. Maybe I should be asking what is an artist? An artist is a teacher, one who teaches others to see the beauty in things. That was a joyful epiphany back then.

Fast forward all these years, and I’m dealing with a topic I don’t want to describe in detail; other than to say it’s heavy. I am now a firm believer in premarital counseling. Young people think that well, we’re compatible on the big things, so the rest will work out. Not so fast Kimosabe. Be very careful about marrying someone from a different subculture.

Take me for instance. I started on a life of drugs, crime, alcohol, and violence when I was 13. I was in the biker subculture. Not that I’m Joe Bad by any means, it’s just where I was. I haven’t interviewed others, so it’s a guess, but there seems to be a different kind of anti establishment feeling there. The Hippies had their version of anti establishment ideas; which were probably more idealistic; but the bikers seemed more fed up with cultural norms. Norms which required a lot of work to attain and maintain; but which didn’t offer enough return for the loss of freedom.

Maybe that’s a lingering mindset from decades ago (Jesus gave me a new life about 28 years ago), maybe I’m just an artist slob. I have lots of data built up on my phone account, so when I think of something, I search it. I took a break from work, and searched “Why are artists slobs?” That didn’t match any suggested searches, but there was “why are artists weird people?” so I clicked on that.

There was an article, Huffington Post maybe, which looked at the issue. I read it and had another joyful epiphany right then. I was already thinking about some of the things in the article, but didn’t realize so many others shared the same experiences, that, and my mind started contemplating the further implications of it all.

One of the things the article said was that artists are sensitive people. I knew I was, but didn’t know that was part of the artist thing. Don’t take the word sensitive the wrong way, it doesn’t necessarily mean easily hurt feelings. For me, it means a heightened senses, and heightened perception, sometimes,not always. This can be for better or worse. I can walk by an exterior wall, and feel the heat radiating off when others don’t notice. I can see all kinds of color variations when studying a photo in preparation for painting a picture. I can smell a baby that needs a diaper change from across a room full of people, and it gets really bad when I’m served food that tastes bad. It’s like the flavor is pounding on my brain with a hammer. No really. Like I said it has its advantages and disadvantages. When my wife makes a delicious meal, I’m not sure she believes my attempts to describe my appreciation.

As far as sensitivity to ideas, that’s hard to say. It’s possible that an increased awareness comes with learning. For instance, everybody probably has an idea of when someones is saying something that doesn’t quite add up. But if you learn basic logic, you’ll learn the fallacies. Just knowing what they are, and what their names are makes me notice them much faster.

So my mind immediately starts contemplating…so an artist is sensitive…he notices small details, then delves the depths of the his craft to find a way to show those details and feelings with his medium. His audience is his pupils.

I thought of a woman I know, she doesn’t have any hobbies or artistic endeavors, but she is sensitive to relationships. There it is, that’s her art, I could learn those things from her. So many artists out there. I climbed the concrete retaining wall to get back to my truck. I stood up there, looking down on the gently rippled water of the river. The evening sun was glimmering off the water, the university sculling team was gliding across the surface. It was all so nice, truly a moment to thank God. I went back to contemplating details and artistry…how many people bombard their minds with so much cheap entertainment that they can’t see beauty around them? Or the same with food?

In graphic arts, the negative (blank) space is a very important part of the design, The same is true of music. Do people fill their lives with so many cheap sensations that few are truly appreciated? More contemplations, and more pieces of the big puzzle, pieces that last. So maybe that’s why I post pictures of cool stuff I’ve seen. At any rate, the pictures are starting to stack up, I’ll be putting them in this and upcoming blog posts. 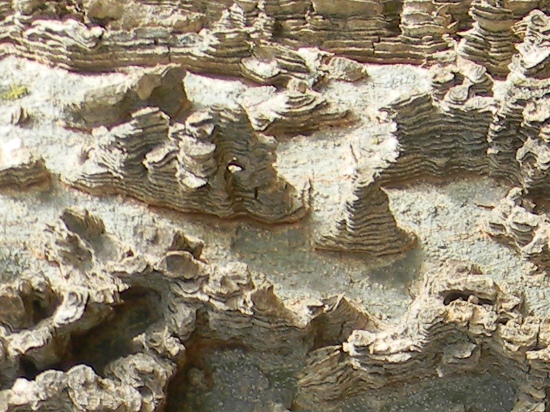 What is it? A canyon somewhere? Here’s another picture of the same thing: 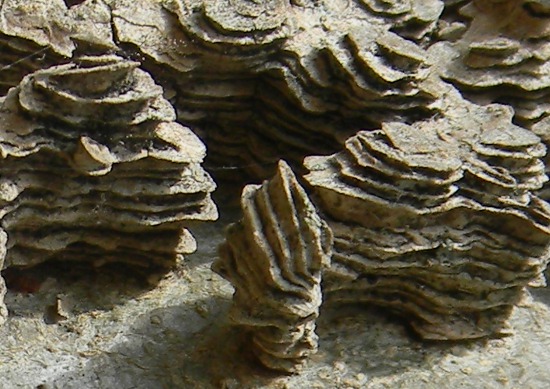 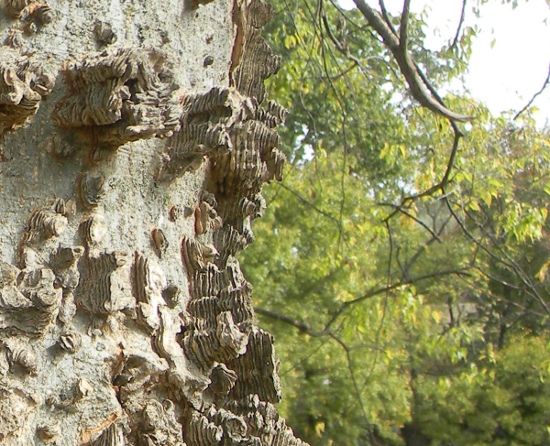 The picture below doesn’t capture the feel very well, but these rail cars were parked on this bridge, it was kind of strange having a heavy object that’s usually ground bound, just parked up there. 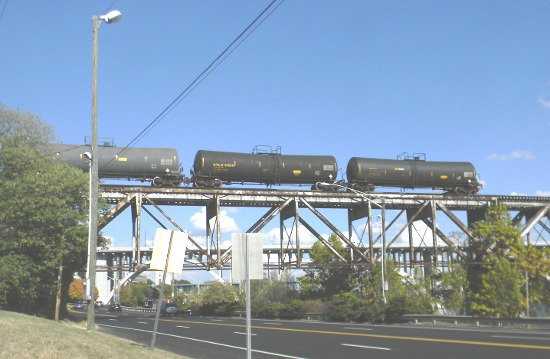 I saw this car below, and wondered what it was. A mercury Capri? Does anybody remember those? Turns out it’s a rare VW. 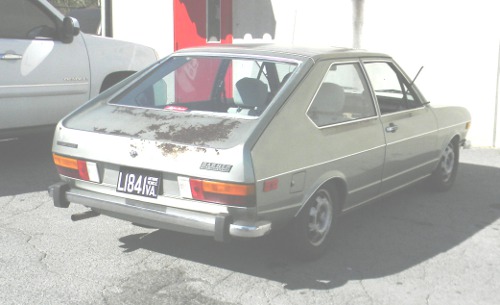 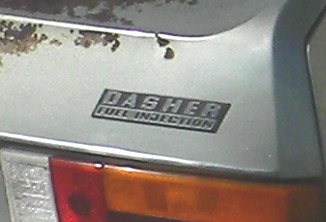 I had a great day today, sorry to make you go through one more click; but that way it’s a permanent page. 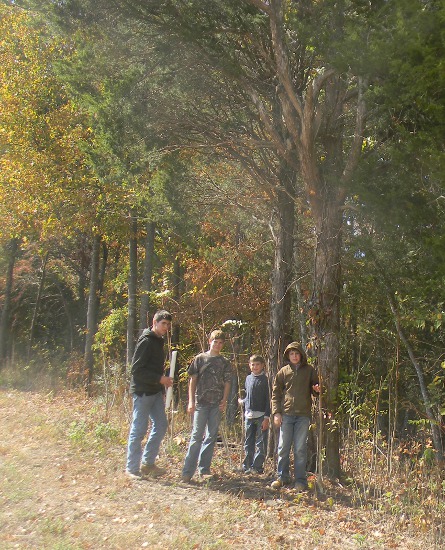 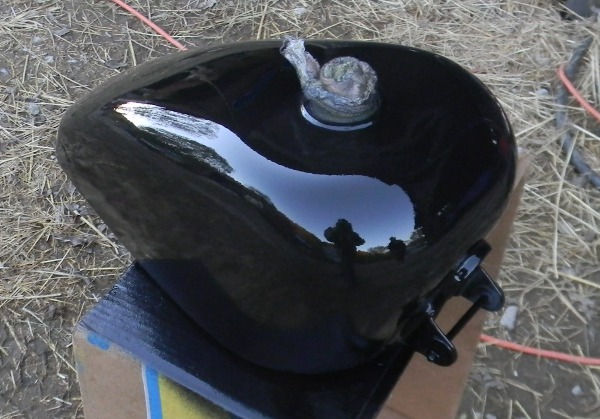 Big fat something…we’re not Greek, and I didn’t want to say redneck, so that will have to do. Besides, it WAS beautiful. I tend to get pragmatic about these things, and think, Look, it’s a public ceremony of vows being taken, the people are there as witnesses.

So draw a map showing where the nearest restaurants are, open some 2 liter soda bottles, and call it good enough. But young women see these thing differently than I do, and who knows? Maybe the world is a better place for it.

Seriously though, one of the main reasons I wanted to make this post was to acknowledge all the work that people did to make it happen. In laws and friends came from all over, spent days directing and working on preparations; and I suspect spent a bit of their own funds to make it happen. My other daughters were slammed in the kitchen for days.

There was a rehearsal the day before; which I initially thought was likely a big fat waste of time. But man, it was SO necessary, otherwise, the brides own father would have been a bumbling doof. More than usual, anyway. Life has been so heavy lately, that the wedding was just another event. That is, until I gave away the bride, and watched her take the vows. Then it’s like “DUDE! wake up, this is for real”.

It all went very well, it was a pleasure to see so many nice looking people well dressed. The weather was literally perfect; at the exact time the sun was setting, the full moon was rising. I was speculating just how many people I’m connected to by direct or distant relation. So many faces from the groom’s family and church. I married the 14th out of 15 siblings, That day my relatives multiplied many times. So how does a wedding like this extend these things?

Anyway, the groom’s name is Sid Zacharias, he’s s bright, level headed young man, and his family seems very stable. Other people got pictures of the wedding itself, I might get and share some of those. Some of the ones I got are below. 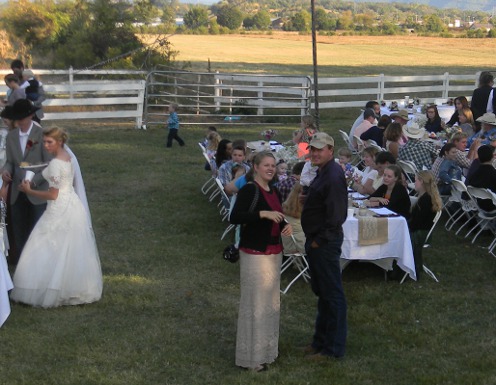 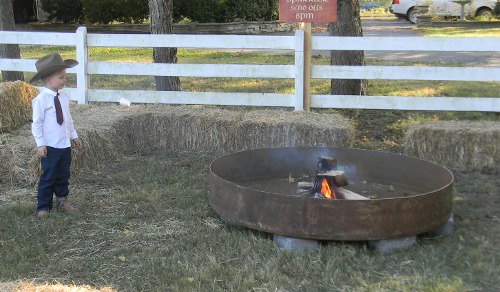 The great Smoky Mountains made a great backdrop for the day’s activities: 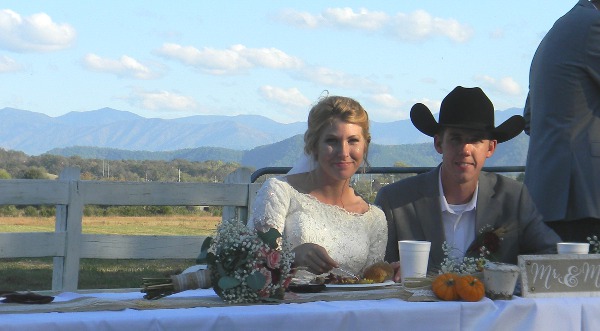 Hey! Why didn’t we make more use of this old truck? A touch of awesomeness! 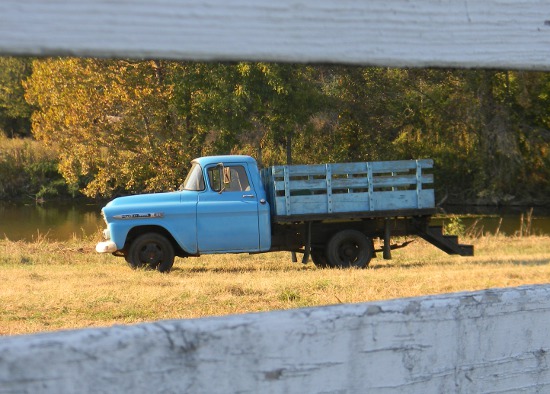 Not a great shot of the rising moon, it was beautiful, like everything else. 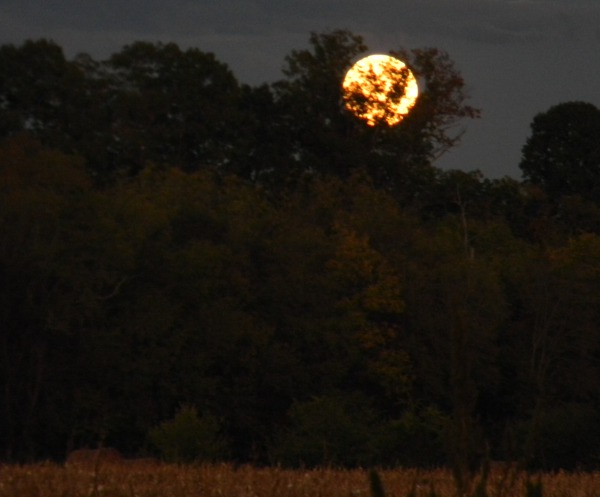