I thought I had included more of these recent pictures in the last post; but I guess I needed to go to bed so badly that I omitted them. Anyway, the first picture is of several tools that were given to me yesterday. I got the impression that they gave them to me because they thought I would preserve them. Right they are, restore actually. What you’re seeing are two benches, the first one wood, the second one steel. The first one has an old school bench grinder on it. In those days, the motor and grinder were separate, a v-belt was used to drive it. The second bench has a large electric motor on the bottom shelf. There are two tools powered by it. Closest to the gold van is a table saw, opposite it is a jointer. A jointer is like a mini planer, it makes the side of a board straight, so that multiple boards can be arranged next to each other without gaps between them. These are very well made tools; I think with a nwe electric cord, they would function right now. But I want to do a better job.

The progress will probably be recorded on my restoration blog: 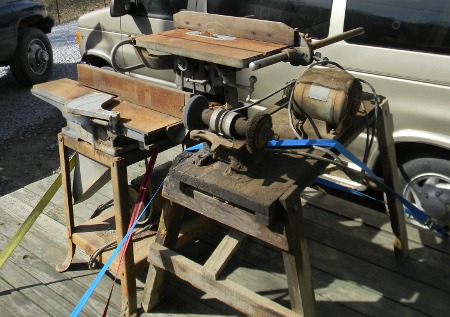 Below are a couple of attempts at getting a picture of the moon coming up behind trees on a ridge. In one of them, you can see a shadow of my 1951 Chevy truck; cast by the porch light. 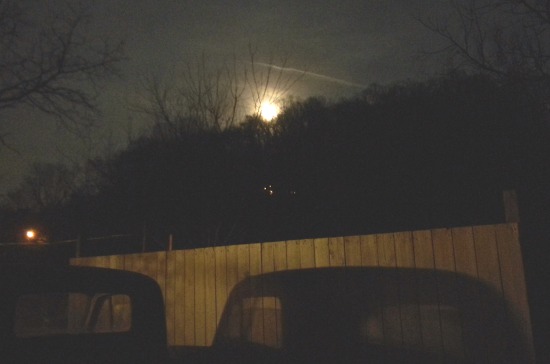 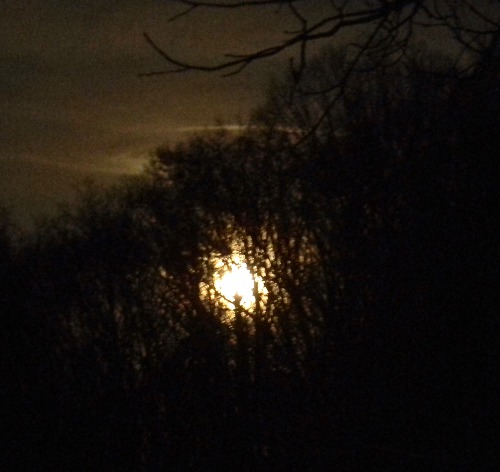 Lastly, is the old MG. I like to get pictures  from very perpendicular angles. that way, if I ever make a vector file of the vehicle, I have angles that preserve the most information. There is always a certain amount of perspective distortion, but this is pretty good. I have more pictures form other sides of the car, and the dash, along with the emblem.

Once in a great while, I see hoe made hand lettering that is noteworthy. Below is such a case. This sign was at Bays Mountain Saddle Club in Seymour Tn. The first book I read about lettering said that each letter style conveys an emotion. So it is with this lettering. It doesn’t comply with some of the rules of typography, but it has a very joyous feel. It would be worth making a font based on this. 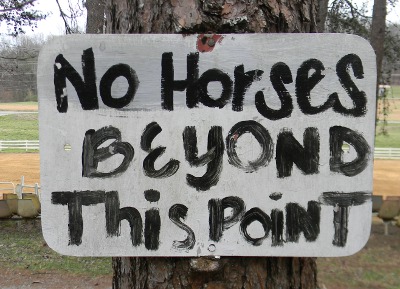 Mostly pictures of cool stuff I encounter. This first one is disconcerting though. I was taking a picture of a wall I might paint. There was a road between it and myself. A bus drives right into view. See the boy in there? he looks like he might be thinking; what does he think about? Does he have any idea how many things are arranged against him? He’s already in public school. They’ll teach him that there is no God. He’ll be continually bombarded with movies about violence and immorality. They’ll not teach him to question or learn about why the economy doesn’t work. he’ll grow up not knowing what’s wrong with his employment, marriage or politics; and he’ll raise his children the same way.

I often take pictures of trucks, mostly old trucks. I need to find a place to make the original larger picture available to the public. Maybe anonymous FTP. Maybe the cloud. here are some new wheels and tires. 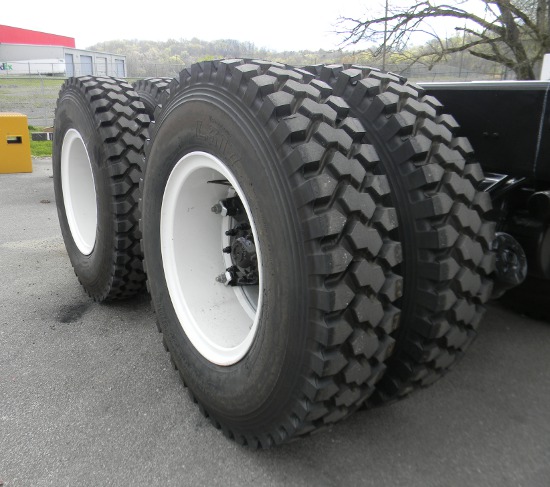 I found a cool blog called “weapons man”. He recently had A POST about perceptions. Since then, I’ve started taking notes of the things I misperceive. The next picture is how I saw a bin the first day. I thought, “Neat, that’s where they keep RR spikes. The next day, I realized I was wrong. 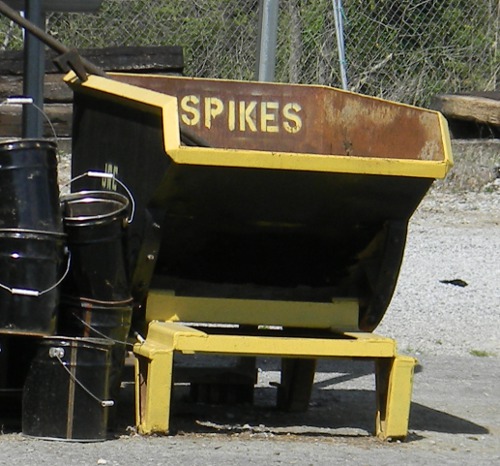 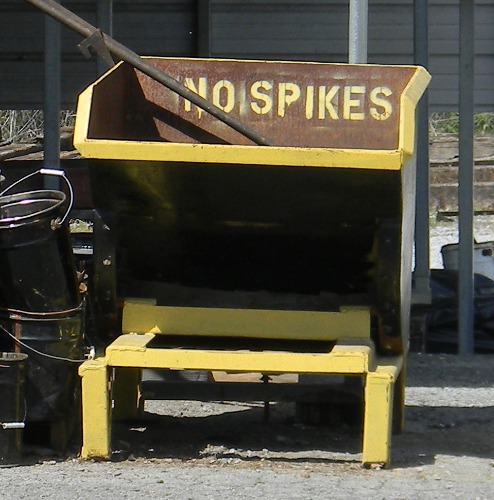 In the previous post, I wrote about a dismal dream I had. I clearly recall wondering why I had the dream, and remembering that I hadn’t prayed for Russia the night before. Things I pray about: Safety and wisdom for President Putin, prime minister Medevev, secretary of state Lavrov, and chief of staff Shiogu. Also safety for the pilots in Syria. I pray that the people of Russia are able to deal with the sanctions, pray about AIDS, abortion, alcoholism, drug use, and tuberculosis. I pray that people will have the wisdom to keep wicked movies and TV out of their homes.

Maybe the dream was a warning to me about not missing prayer. That God answers prayer is obvious in my life; He answered a prayer this morning, it was a joy. I’m of the opinion that President Obama’s actions toward Russia are vindictive. A new concern is that if he feels he hasn’t exacted enough revenge before he leaves office, he’ll do something worse.

The Bible tells us to pray for our own leaders, that we may live peaceable lives. If I recall, it doesn’t tell us to pray for the leaders of other counties. It’s difficult to pray for the leaders of the US. I do pray that God would hinder their plans. I also pray that God would change their hearts, but that one seems so unlikely that I have to force myself to pray it. Praying for Russia is easy. They are resisting the wicked empire building of the West. The Western countries liberate smaller counties so that they can have their first rainbow pride parade. When the Greeks brought their culture to a defeated foe, it was called the Helenization of that land. Maybe we could call ours the Elleniztion of conquered foes?

Seriously though, please join me in praying for the well being of Russia and her people.

Speaking of prayer, one should always remember Proverbs chapter 15, verse 3, where it says that The eyes of the Lord are in every place, beholding the evil and the good. That way, you can know for certain that even if you don’t know who left an alcohol bottle by the road, God does, and he will work in their life. I have a few things like that I’ve kept over the years. Below is a picture of one that stays in the back of my truck, along with tools and supplies. The extra labeling is so that police officers won’t think I’m driving around drinking it myself. 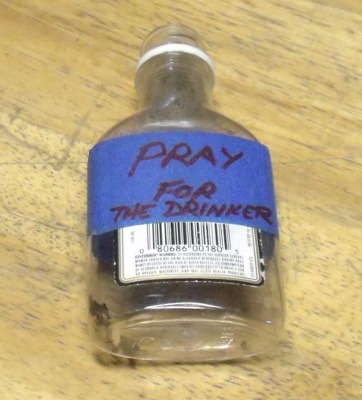 I have a number of rewarding jobs going right now; here’s a link to a page about one I just finished. 425 HP 426 Hemi Belvedere

A conspiracy under every rock, I’ve got to be careful that I don’t think that way. The problem of course is that there -are- a number of real conspiracies out there. So here’s something I’m wondering about; people with more technical knowledge might say “Oh that’s easy, what you don’t realize is that…”

Have you ever used C_clean? It’s a utility tool for your computer, to keep it running faster. I’ve used it for years, it’s very convenient. That’s the point; try and find a process cleaner that’s anywhere NEAR as easy to use. I would say 75 percent of software applications have a process that starts up and runs constantly when the computer is on. I guess this is to make their program come to life faster when you go to use it. The problem is that having 50 things running slows down your computer. I wish someone made a really simple process cleaner that identifies which processes are necessary to run the operating system (Windows, Linux, etc.) Then I could disable the others from starting up every time the computer starts.

Maybe the thing is easily resolved by knowing where to look for this elusive process cleaner. But I can’t help wonder if that would eliminate government spyware.

I ordered and received a Cyrillic keyboard online. There were a lot for sale in the mid $40 to mid $50 range, but I got one for $3 plus shipping. I got it, and it works well. I had to activate another language in Windows, and at least 2 programs don’t recognize the language/keyboard combination. Those 2 happen to be the ones I wanted it to work with the most, they being for graphic art productions. I does however work well with Open Office software. I remembered how Open Office has a draw program (vector editing) included in the suite. So I tried it in their draw program, and it worked very well. I then copied the text from Open Office into Inkscape. It’s a lot simpler than it sounds. Now I can easily add Russian Bible Verses to some of my free clipart offerings at the Inkscape free vectors gallery. I have one in mind that I’m looking forward to.

Speaking of Russia, I go to web sites that have a pro-Russian view, because I don’t trust most Western sources. I had a dream about a week ago, it was rather vivid, and I remembered it. It was dismal, but I thought I should post it online, in the event it was a warning of sorts, and not merely my imagination. I posted it at the news site I frequent the most, thinking that since I’ve commented there many times, it might give it more credibility. In the dream, President Putin died in an airplane crash. I was among the people searching the crash site for debris. Yes, dreams are strange. The ground was dark black and smooth, like some sort of rock. I found a metal object, which I was told was a family heirloom. It was silver color, cylindrical in shape, had a couple ridges going around it, and was about 6 inches in diameter. 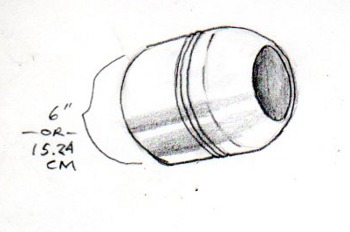 I’ve been commenting there for quite awhile, but I wonder if any friendship or credibility I had is wrecked. Some people merely burn bridges, I nuke them. There’s a lake forming as we speak. Maybe I should have been more tactful in my choice of words. Maybe I should have sent the message to the FSB. They would have thought “Another idiot American. What is that, the fourth one this week?” Maybe I’m supposed to channel this sort of thing through American agencies. But they would say “Harm the Russians? Good! We’ll send this message right along…next year.”

Sigh, you try to do the right thing. 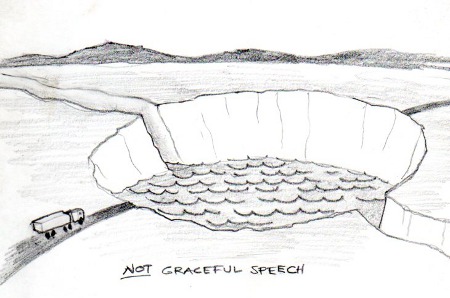 More strange dreams? OK, I had one this morning, maybe it was yesterday. For whatever reason, I needed to travel with my brother in law out of town for a few days. Money was tight, so he arranged for us to take care of somebody’s gas station for a few days. Everything went fine, but on the last day, as I was holding a clear plastic bag full of cash from gas sales; two police officers showed up and were treating us as though we were suspicious. They told me to go sit down while they questioned my brother in law. It was then that I realized I never saw their patrol car. They merely walked on the premises. I started thinking that maybe they weren’t police at all; but then I awoke.